Lawrence Livermore National Laboratory is one of three federally funded research and development centers operated by the U.S. Department of Energy. It is located in Livermore, California. Livermore is about 40 miles east of the heart of San Francisco. Its primary duty is ensuring the safety, security and reliability of the United States nuclear weapons through the application of advanced science, engineering and technology.

One of newest projects at LLNL is the installation of the Sierra supercomputer. It was completed in 2018. Sierra is very similar in architecture to the Summit supercomputer built for the Oak Ridge National Laboratory in Tennessee. It is operated in conjunction with the United States National Nuclear Security Administration.

Sierra is just one of several supercomputers in operation at LLNL. They are all located in the Livermore Computing Complex. It operates in just under 10,000 square feet of space at the laboratory. The Computing Complex handles both classified and unclassified national security programs. Sierra is currently ranked as the number two supercomputer in the world. It has a sustained maximum performance of 94.6 petaflops per second. A petaflop is a unit of computing speed equal to one thousand million million (1015) floating-point operations per second. However, a more powerful supercomputer is already in development at LLNL. It will be named El Capitan.

Sierra is completely cut off from any other network. This practice is known as Air-Gapping. This was done so that Sierra will operate in a classified manner. Sierra will be trying to answer questions about our current nuclear arsenal. The arsenal cannot be tested because of a nuclear non-proliferation treaty signed by the US in 1970. Sierra will tackle this issue by modeling and running simulations.

One of the challenges LLNL faces is its location. It is located in a high-risk seismic region of Northern California, the San Francisco Bay Area. There are seven major earthquake faults in the San Francisco Bay area: The San Gregorio, San Andreas, Hayward, Calaveras, Rodgers Creek, Concord-Green Valley, and Greenville faults. This means that the Livermore Computing Complex could experience damage from a seismic event occurring on one of these faults, or even one that is not listed. According to the USGS, the San Francisco Bay area has a high probability of experiencing an earthquake of at least 6.7 magnitude sometime in the next 30 years.

This has been remedied for Sierra as well as the other supercomputers in the Livermore Computing Complex. Since 2011, LLNL has been installing ISO-Base™ platforms underneath their server racks. ISO-Base™ was developed using proprietary base isolation technology. Its patented Ball-N-Cone™ isolator protects valuable IT equipment by decoupling strong seismic shock and vibrations away from sensitive components.

ISO-Base™ currently protects nearly one half trillion dollars of IT equipment in over 30 countries. For nearly 20 years, ISO-Base™ has been tested and proven in significant real-world events in Japan, Peru, New Zealand, Nepal, and many others without failures.

LLNL chose to protect the security of their entire supercomputing complex with ISO-Base™ platforms. This helps ensure the performance and the operational continuity of Sierra. Shouldn’t you? 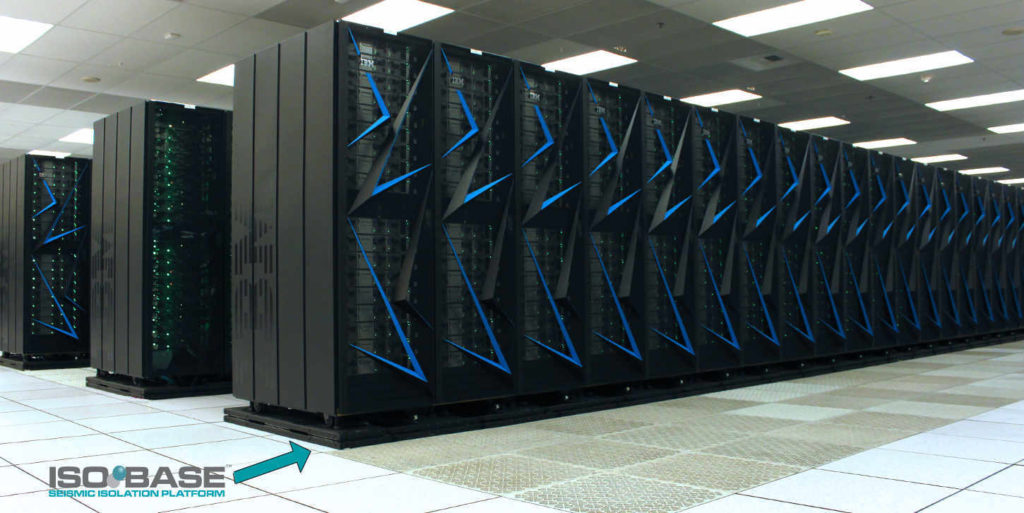